CIVIC, which stands for Community Initiatives for Visiting Immigrants in Confinement, is a national non-profit with a mission to end U.S. immigration detention, particularly privately-run detention facilities.  In October, Corrections Corporation of America (CCA) announced that it would be changing its name to CoreCIVIC in violation of CIVIC’s common-law trademark rights in the word mark CIVIC.

CIVIC is well-known to CCA.  CIVIC has spoken out publicly against CCA on multiple occasions.  CIVIC raised concerns about sexual abuse of immigrants detained at a CCA facility in San Diego.  CIVIC drafted and co-sponsored legislation in California to end private immigration detention contracting in the state.  And CIVIC advocated for the Department of Homeland Security to shift away from private immigration detention contracting, which they voted to do earlier this month.

“It is shocking that CCA would steal our name in what can only be construed as an effort to create undue confusion for immigrants in detention and exploit the goodwill associated with our name,” says Christina Fialho, co-founder/executive director of CIVIC.

All of the people CIVIC serves are immigrants, and many have limited English skills. Most are trying to navigate the detention system and complex immigration laws without legal counsel.

“There is an irony to the fact that a corporation in the business of running private prisons chooses to re-brand itself with the trademark of one of its most active critics and watchdogs.  Whatever the motive, however, the new name is likely to result in confusion among the clients, supporters and regulators who already know the good work of CIVIC in the field of prisoner services and prison reform,” says Jonathan Kirsch, pro bono trademark counsel for CIVIC.

This is not the first time CCA has hijacked key phrases in the immigrant rights movement.  Facing growing criticism from the public and the government, CCA and other private prison companies have invested in “alternatives to detention,” a term advocates have long used to refer to community-based programs that ensure immigrants are released from detention to the community and provided with the support they need to best fight their immigration case.  CCA misappropriated this term, redefining it to mean lucrative programs that tag people with ankle monitors and burden them with excessive reporting requirements.

“We will not allow CCA to usurp our name or confuse immigrants in detention with this underhanded move to profit from our good work.  CCA must stop using our trademark,” says Christina Mansfield, co-founder/executive director of CIVIC.

CCA’s CEO said that the company is changing its name to “give them access to new markets in states like California that have previously resisted private-prison firms.” CIVIC is headquartered in California.

CIVIC has retained the Law Offices of Jonathan Kirsch and Kendall Brill & Kelly in this matter. 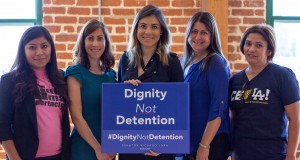 Today, as part of a broader #Fight4CA legislative package, Senator Lara (D-Bell Gardens) re-introduced the Dignity Not Detention Act, co-sponsored by Community Initiatives for Visiting Immigrants in Confinement (CIVIC) and the Immigrant Legal Resource Center (ILRC).  This bill is in line with the Department of Homeland Security’s vote on December 1 to phase out the use of private contracting in its immigration detention operations.

In effect, the Dignity Not Detention Act will prohibit local cities and counties from entering into new contracts with private, for-profit companies to operate immigration detention facilities in California.  It also will require all detention facilities to uphold national humane treatment standards.

This bill is especially timely during the transition to the incoming Trump administration. President-elect Trump has promised to expand the United States’ immigration enforcement apparatus as part of his initiative in his first 100 days to target 2-3 million immigrants he has inaccurately labelled “criminals.”

“Now more than ever, we must safeguard human rights in immigration detention,” said Christina Fialho, a California attorney and the co-executive director of CIVIC.  “We are confident that the legislature and the Governor will make dignity not detention the law of the land this coming year.”

There have been consistent reports of human rights abuses in detention facilities, including physical and sexual abuse, poor access to healthcare, little access to legal counsel, and overuse of solitary confinement, and even death. LGBTQ immigrants have reported facing discrimination, harassment, and abuse due to their sexual orientation. In many of these instances, even the Department of Homeland Security has found these deaths were preventable. Tragically, the incidents often go unaddressed and victims have no recourse.

Private, for-profit immigration detention facilities present a host of problems. The facilities are not subject to the Freedom of Information Act and operate with little to no oversight. Many also operate under contract incentives where they are guaranteed a minimum number of immigrants in their facility at all times, ensuring their billion-dollar profits.

Currently, ICE has a set of Performance-Based National Detention Standards in place, but they lack any real enforcement mechanism. The Dignity Not Detention Act would be the first state-level bill to codify these standards into law, and provide redress for immigrants whose rights have been violated.

Individuals who have been detained speak out in support of the Dignity Not Detention Act:

“Immigration detention in the United States has become a financial market where people’s lives are being treated as profit.  This bill is a clear step in the right direction,” said Sylvester Owino, an asylum seeker from Kenya who spent 9 years in immigration detention, primarily in California.

“While in detention, my religious freedoms were often violated.  As a Muslim, my religion calls me to prayer at certain times of the day.  Many times, officers forced me to choose between having breakfast or lunch and practicing my faith.  I would always choose prayer, but this meant that many days I went hungry,” said Mohammed Kamal Deen Ilias, an asylum seeker from Ghana, who was detained at Adelanto Detention Facility from April 17, 2015, to February 5, 2016.

“Taking your dignity and pride is one thing, but taking away your dreams, what’s after that?  In immigration detention, you feel helpless.  You feel impotent to the system.  You don’t know what’s going to happen next.  Psychologically, you start deteriorating,” said Carlos Hidalgo, a father and grandfather of U.S. citizens, who was held at Adelanto Detention Facility for over a year.

“In the beginning, the Department of Homeland Security sent me together with my daughter to James Musick Facility.  After two weeks, DHS separated me from my daughter. I was sent to the CCA facility in San Diego and then to the GEO facility in Adelanto. They didn’t tell me about my rights and made arbitrary decisions.  They put me into segregation, abused and tortured me and compromised my physical integrity to a point that I was in need of a wheelchair,” said Petra Albrecht, a mother originally from Germany who was held in immigration detention for over 1 year. 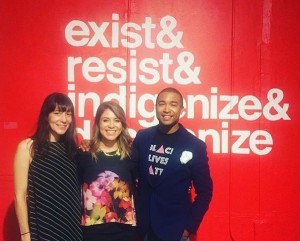 CIVIC submitted to the Council a 52-page report on why ICE should end for-profit immigration detention facilities.  CIVIC also partnered with the Detention Watch Network, Grassroots Leadership, the National Immigrant Justice Center, American Immigration Lawyers Association, and the CARA Family Pro Bono Detention Project to gather over 40 affidavits from people who were at some point detained in a private immigration detention facility.

How did this result come about?
After the Department of Justice announced it would be phasing out private prisons, DHS appointed a subcommittee of the Homeland Security Advisory Council to review and write a report on whether DHS should end privatized immigration detention facilities.  The Subcommittee report, which was in draft form, supported the continuation of private immigration detention facilities, although it did make recommendations for improving ICE detention oversight and monitoring.  One HSAC Subcommittee member Marshall Fitz (with the Emerson Collective) dissented from this recommendation and recommended that “a measured but deliberate shift away from the private prison model is warranted.”