Washington, DC — Immigrant rights organizations, Community Initiatives for Visiting Immigrants in Confinement (CIVIC), Detention Watch Network (DWN), Immigrant Youth Coalition, and the Inland Coalition for Immigrant Justice demand an immediate investigation into the death of Sergio Alonso Lopez. Lopez, 55, died last Thursday while in the custody of Immigrations and Customs Enforcement (ICE) after being detained at Adelanto Detention Center in California. This tragedy marks the second death to occur at Adelanto this year, after Osmar Epifanio Gonzalez-Gadba died less than three weeks prior.

“It is appalling that this is the second death to occur at Adelanto in the past three weeks,” said Christina Fialho, Co-Founder and Executive Director of CIVIC. “The Adelanto Detention Facility is known for its substandard medical care.  Since February, we have seen a huge increase in the number of medical complaints coming from Adelanto.   The deaths of Mr. Lopez and Mr. Osmar Epifanio Gonzalez-Gadba, who died in March, should be fully investigated to ensure that theirs deaths could not have been prevented.”

The Adelanto detention center where Lopez died is operated by The GEO Group Inc., a notorious private prison company that has a well-documented track record of abuse, mismanagement and neglect. A total of five people have died there in the five years since it opened. The passing of Lopez brings ICE’s total death count to 170 since 2003 — a shameful record further exposing ICE’s inability to guarantee the safety and health of people in their custody. Recent investigations into deaths in immigration detention have found that inadequate medical care at detention centers has contributed to numerous deaths.

“The Adelanto detention center exemplifies the systemic abuses found throughout detention centers nationwide,” said Javier Hernandez, executive director at the Inland Coalition for Immigrant Justice. “People are not safe in detention — Adelanto needs to be shut down immediately as a first step to ending the system in its entirety.”

“Community detained in Adelanto often speak about the medical neglect in this facility and even as they attempt to seek medical assistance or make complaints they are always ignored by staff or even transferred when their health keeps deteriorating,” expressed Marcela Hernandez, Deportation Defense Coordinator with the Immigrant Youth Coalition, “these detention centers are a symbol of the worst human rights abuses and we must continue advocating for their closure rather than expansion.”

This death comes the same month that Congress is considering Trump’s request for $3 billion in extra funding to significantly increase the number of people locked up in detention centers and dramatically expand the deportation force. With detention already at a historic high, Trump’s anti-immigrant agenda will come at the expense of immigrant lives and taxpayer’s wallets if approved by Congress.

“We are outraged by the disregard for human life and ICE’s ongoing refusal to meet demands for transparency. Trump’s plan to expand an already deadly detention system will only further exacerbate the abuse and inhumane conditions that have proven to have fatal consequences,” said Gabriela Benitez, organizer at Detention Watch Network.

Community Initiatives for Visiting Immigrants in Confinement (CIVIC) is the national immigration detention visitation network, which is working to end U.S. immigration detention by monitoring human rights abuses, elevating stories, building community-based alternatives to detention, and advocating for system change.  We have been visiting and monitoring the Adelanto Detention Facility since 2012.  For more information, visit www.endisolation.org.

The Immigrant Youth Coalition (IYC) is an undocumented and Trans* & Queer youth led organization based in California founded in 2010. IYC’s mission is to mobilize youth, families and incarcerated people to end the criminalization of immigrants and people of color. We organize to create social change that confronts the interlocking systems of oppression. For more information visit www.theiyc.org

Inland Coalition for Immigrant Justice is made up of over 30 organizations and community groups in the Inland Empire, and is dedicated to convening organizations to collectively advocate and work to improve the lives of immigrant communities while working toward a just solution to the immigration system. Visit our website, http://ic4ij.org/ or our Facebook page, https://www.facebook.com/IC4IJ for more information.

Detention Watch Network (DWN) is a national coalition of organizations and individuals working to expose and challenge the injustices of the United States’ immigration detention and deportation system and advocate for profound change that promotes the rights and dignity of all persons. Founded in 1997 by immigrant rights groups, DWN brings together advocates to unify strategy and build partnerships on a local and national level to end immigration detention. Visit www.detentionwatchnetwork.org. Follow @DetentionWatch. 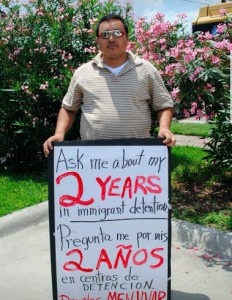 Douglas Menjivar (above) was raped in U.S. immigration detention.

Community Initiatives for Visiting Immigrants in Confinement (CIVIC), a national advocacy organization, filed a complaint today calling for a federal investigation into reports of sexual abuse, assault, and harassment in immigration detention facilities and for the rapid development of protocols to ensure that all such reports of sexual abuse are thoroughly investigated and that relevant records are disclosed to the public.

April 11, 2017, Washington, DC – Community Initiatives for Visiting Immigrants in Confinement (CIVIC) has filed a federal complaint with the Office for Civil Rights & Civil Liberties within the Department of Homeland Security (DHS) detailing the prevalence of reports of sexual abuse, assault, and harassment in U.S. immigration detention facilities and the lack of adequate government investigation into these reports.

For its complaint, CIVIC analyzed data obtained through a Freedom of Information Act (FOIA) request for sexual assault data from the DHS Office of the Inspector General (OIG). The OIG received at least 1,016 reports of sexual abuse filed by people in detention between May 2014 and July 2016, meaning that the OIG received on average more than one complaint of sexual abuse from people in detention per day during this time period. CIVIC found that the OIG investigated only 24 of those complaints, or 2.4% of the total.

“The data is particularly disturbing given that rape and sexual assault are known to be highly underreported in immigration detention facilities due to fears of retaliation, social isolation, language barriers, and the knowledge that allegations are not seriously investigated,” said Rebecca Merton, Independent Monitor and Program Coordinator of CIVIC’s National Visitation Network.

CIVIC also analyzed data regarding calls made to the ICE ERO Detention Reporting and Information Line (DRIL) between October 2012 and March 2016. According to this data, the highest number of DRIL calls related to sexual and/or physical abuse incidents came from the Jena/LaSalle Detention Facility, followed by the Houston Contract Detention Facility, Adelanto Correctional Facility, Northwest Detention Center and the San Diego Contract Facility. All top five detention facilities with the most sexual and physical complaints are privately operated.

CIVIC is submitting this complaint on behalf of 27 people, including 8 class representatives, who are in immigration detention or have been released from detention and have experienced sexual abuse.

One of these individuals, Rosanna Santos, was sexually harassed by a corrections officer in immigration detention at the York County Jail, who told her that if she did not do whatever he said that he would sodomize her. Shortly after filing a complaint about the incident, Ms. Santos was inexplicably placed into solitary confinement for 11 days.

“A lot of the girls there had problems like this. Most of them don’t even end up complaining or saying anything about it because they’re scared of retaliation,” said Rosanna Santos, a class representative in the complaint. “Since my complaint, nothing has happened. It is like they want to keep me quiet.”

In light of the disturbing reports and numerous sexual abuse allegations detailed in their complaint, CIVIC is urging Congress to establish the second bipartisan National Prison Rape Elimination Commission (NPREC) to investigate the effectiveness of PREA in preventing sexual assault and violations of PREA in CBP and ICE detention facilities. CIVIC is also calling on DHS to ensure that all DHS facilities, including all ICE detention facilities and CBP holding facilities, have not only contractually adopted but also implemented the DHS PREA standards, and to proactively and quarterly publish information on all reported complaints of sexual abuse in DHS facilities.